Thompson’s engaging, high-energy Christian murder mystery is narrated by Martha McRae, a woman living in a small Mississippi town who seeks to solve the mystery of the sudden death of pastor David Baddour. Throughout the novel, readers are introduced to the cast of characters who inhabit the small Delta town in the 1950s. The book gleefully mixes all the elements of a small-town murder mystery—gossip, foul play, backstabbing—and, as more is revealed about Pastor Baddour and the other townspeople, more mysteries, hypocrisies, and dangers add to the intrigue. In spite of the danger McRae faces, she leaves no stone unturned. As she moves closer to solving the mystery, she must grapple with difficult truths about faith, honesty, sin, and redemption. With its exploration of small-town life in and close examination of the inhabitants of the town, Thompson’s tale looks intimately at what it means to function in a community—how a population can reveal and obscure the truth. Folded into the narrative are many Christian lessons, musings, and references, which can be interesting and edifying for some readers of faith. (BookLife) 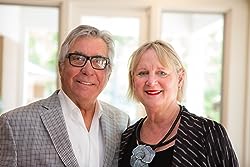 Following
NOTE: The Parchman Preacher has been replaced by The Rector, a full-length suspenseful murder mystery, with an allegory of Christ’s ministry. Publisher’s Weekly says The Rector is “an engaging, high-energy Christian novel.”

Michael has taken two of Media Bistro’s Master Novel Writing courses. Caitlin Alexander, former editor with Random for nine years, was the instructor for The Rector.

Now, The Actress is out, second in the Solo series. And a movie is being made of The Rector! Michael will be writing a monthly behind the scenes newsletter about the making of a movie. Learning more is easy. It’s easy to sign up on his web site.

Here he is with his wife of 46 years, Tempe Adams Thompson.

Michael received his masters degree in mass communication from the University of South Carolina, after an undergrad from Ole Miss. He started a one-man ad agency that grew into 87 employees in two cities, where he was CEO/creative director/copywriter. His firm, Thompson & Company won numerous national and international creative awards. He sold the firm in 2011, and now devotes his time to writing the Solo series. The Rector has already won several major awards.

He’s been a team member in Kairos’ prison ministry for two years; also been to Cuba on door-to-door evangelism trips, and spoken at large conventions as featured speaker on the life of David ben Jesse.

* You can actually “See Inside” the DAVID books at http://www.shepking.com, or Amazon. Oh you won’t want to miss the photo of Goliath and the Ark of the Covenant. Michael had both of them made for a book signing tour.