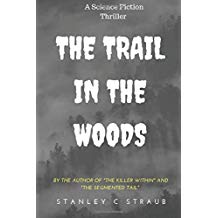 The Trail In the Woods

The Devil’s Tail has long been rumored to be a trail of no return. One goes up the trail and never comes back. Friends, Janet and Bob, are determined to find out its secret, so they venture up the path.  What they find amazes, enthralls and terrifies them. At the end-of-the trail, they encounter a cave that contains a room with a massive generator. They also meet a resident who is held, prisoner. They meet the landlord of a gorgeous valley. Then, they are captured.

From there, they live in a fantastic Valley of Eden, a paradise, with all their wants and needs cared for as long as they follow directions. They are well treated, but cannot leave. `

This is a fight between good and evil. A monster who declares he and his followers are from the planet Cosmos. He claims he’s God. Is he? Or, is he something very different?

The story, itself, kept me interested. Although the characters don’t have enough depth, I wanted to know what happens to them and where this story goes.

I would suggest the author get this proofed by a professional editor.  As is, the book might be a fun first-draft, but it needs polishing.

There are issues with misspellings, head-hopping, passive verbs and adverbs, redundancies and not enough sentence variety. He tells way too much of the story rather than dropping us into the landscape looking over the characters’ shoulders.

Stanley C. Straub was a guided Missile Technician in the Navy and worked as an electrical engineer in the Aerospace Industry. He is eminently qualified in writing this sci-fi thriller.

One thought on “BOOK REVIEW: THE TRAIL IN THE WOODS”